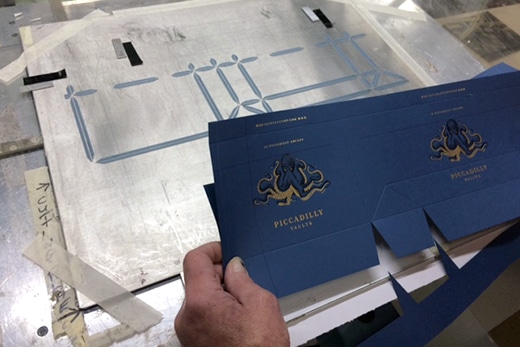 Finding the best people for the job

At CSD we pride ourselves on working with the best collaborators, searching long and hard until we find the right people for the job. A recent branding project for a jewellery company proved just that.

We commissioned a beautiful but extremely intricate illustration from Olivia Knapp which we needed to be foiled in two colours on a range of collateral including carrier bags.

With a tight deadline, a small print run and the approaching Chinese New Year we wanted to keep production of the bags in the UK. So, armed with detailed visuals we set about approaching a variety of producers. All the bag manufacturers we found advised us that the designs were too detailed to be foiled and that we should consider a metallic pantone for the bag printing instead.

Undeterred, we continued our search, finally finding the brilliant A14 who agreed to help with the foiling and manufacturing of the bags.

Discussing the project further we agreed to use a magnesium foil block which holds more detail than regular foil blocks and decided, given the complexity of the design, we would do a foil proof to confirm we could achieve the desired level of detail.

The proofs were a success and showed the level of detail was possible, however, this was only at the larger bag size. We also needed to produce the Kraken at a much smaller scale to be used on the lining of silks in jewellery boxes and also business cards. For this we asked the illustrator to create a version of the Kraken with considerably less detail. This eliminated many of the finer lines which would have disappeared at the smaller scale.

Working closely with the client, illustrator and printers we perfected the second illustration so that all parties were happy. Resulting in a set of carrier bags with fully foiled illustrations which captured all the detail envisaged at the start of the project.

“Thank you so much for the incredible print/foil sample you did for us. I’ve produced a lot of things over the years and never to this quality; it really is stunning. It’s so rare that something is even better than hoped for, which this certainly was.” Client quote on receipt of the foiled proof.