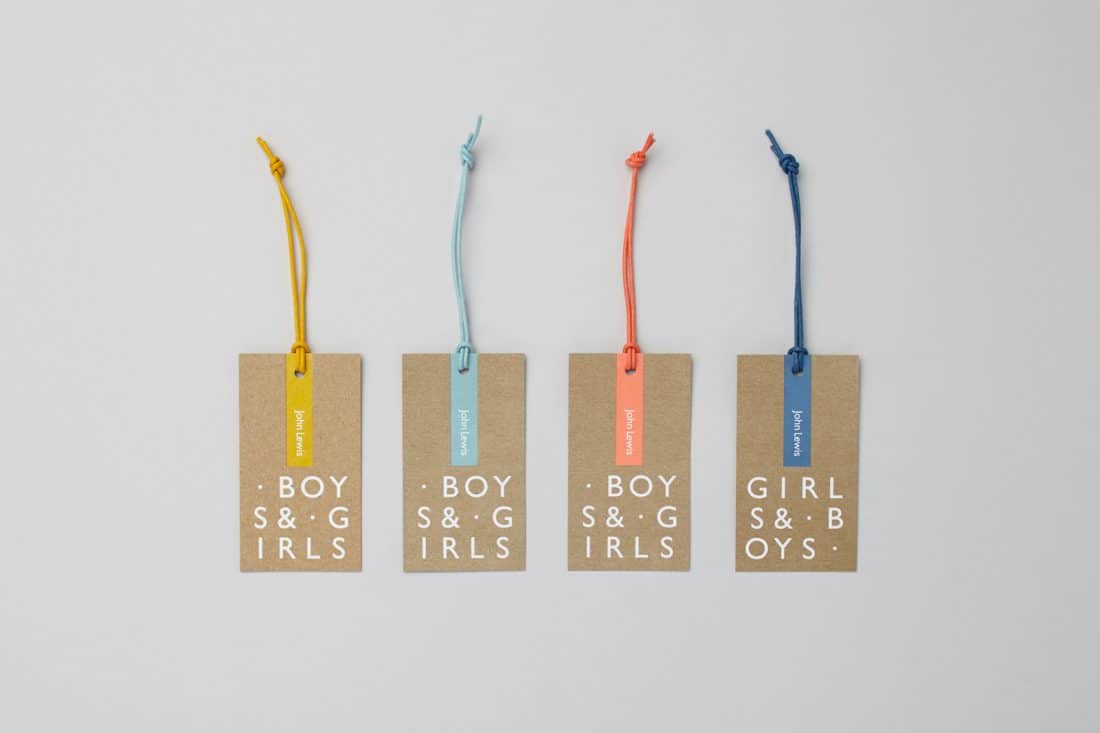 We recently redesigned the identity for John Lewis’s own brand childrenswear range. This covered everything from swing tags to backpack labels and packaging for accessories. The brief was to design a system that would work across the whole childrenswear range, without using gender stereotypical colours such as pink for girls and blue for boys. It was a fantastic project to work on; we were allowed to look at a problem from a different angle, and print some seriously bright colours, which is always something we love!

Using the flexible system we created John Lewis has since taken this idea further, stating that they intend to remove all gender specific labelling within their in-store and online childrenswear departments, as well as creating a new gender-neutral range for ages 0-2yrs.

It was interesting to see our designs used in another way. By simply placing Girls and Boys and Boys and Girls tags on different pieces of clothing. The emphasis on boys or girls first was removed and so It felt like a wholly more general phrase. The original design was intended to feel more inclusive, but seeing how a simple change in the placement of our designs can alter perceptions so greatly has been thought-provoking.

John Lewis’s fresh approach to labelling their childrenswear has turned out to be quite a divisive decision. Although largely supported by their largely supported by parents and their own customers, they have also met strong criticism from some media organisations and public figures, the overriding sentiment being that moving towards gender-neutral labelling is a sign of ‘political correctness gone mad’ and that they are alienating parents and creating confusion.

We feel that removing gender labelling from children’s clothes actually achieves quite the opposite. It is a move towards wider inclusion. John Lewis has righty pointed out that all the same floral dresses and dinosaur themed t-shirts directly geared towards girls and boys respectively are still there and remain very visible in store. The sole difference is that the swing tag will either say ‘boys and girls’ or ‘girls and boys’, and these will be placed at random on any piece of clothing. This allows children and parents to feel free to choose what ever clothes they want, without having to feel like they are going against the wishes of the retailer (and larger society). By ignoring gender rules prescribed by retailers, shoppers are subjected to unnecessary added pressure when simply buying clothes, which does more harm than good.

It has been proven that the gender stereotypes that we teach our children in developmental stages are largely set by the age of seven, and are detrimental to their wellbeing, and often inform paths taken in later life. These stereotypes teach girls that they are of less value, they should expect to achieve less than boys, and that their self worth is directly linked to their looks. They teach boys that showing emotion is a sign of weakness while violence and a ‘stiff upper lip’ is a sign of strength. These lessons are taught subtly but constantly throughout our daily lives from innumerable outlets, and that includes through the clothes that are marked out as appropriate by retailers.

There have recently been more and more cases of parents challenging retailers on the types of clothes that they market towards girls and boys, often focused on the derogatory slogans that are used on girl’s clothing, the limited colour ranges, or the exclusion of girls from themes like science and maths. Retailers have principally responded by removing the offending slogans, but little has been done to actually change the retail landscape on a larger scale. This move from John Lewis is taking things just a little bit further and we support that. Hell, we are celebrating that! Well done to John Lewis in being brave enough to take the lead, paying attention to the wider world and answering it with action.

Looking around it seems like this is part of a larger awareness that has been building up for a while, and it is likely that other high-street stores will eventually follow suit. This is one of the reasons we love working with John Lewis. They are always striving to create own brand ranges that are pushing forward rather than playing catch up, and we are glad to be a part of that.