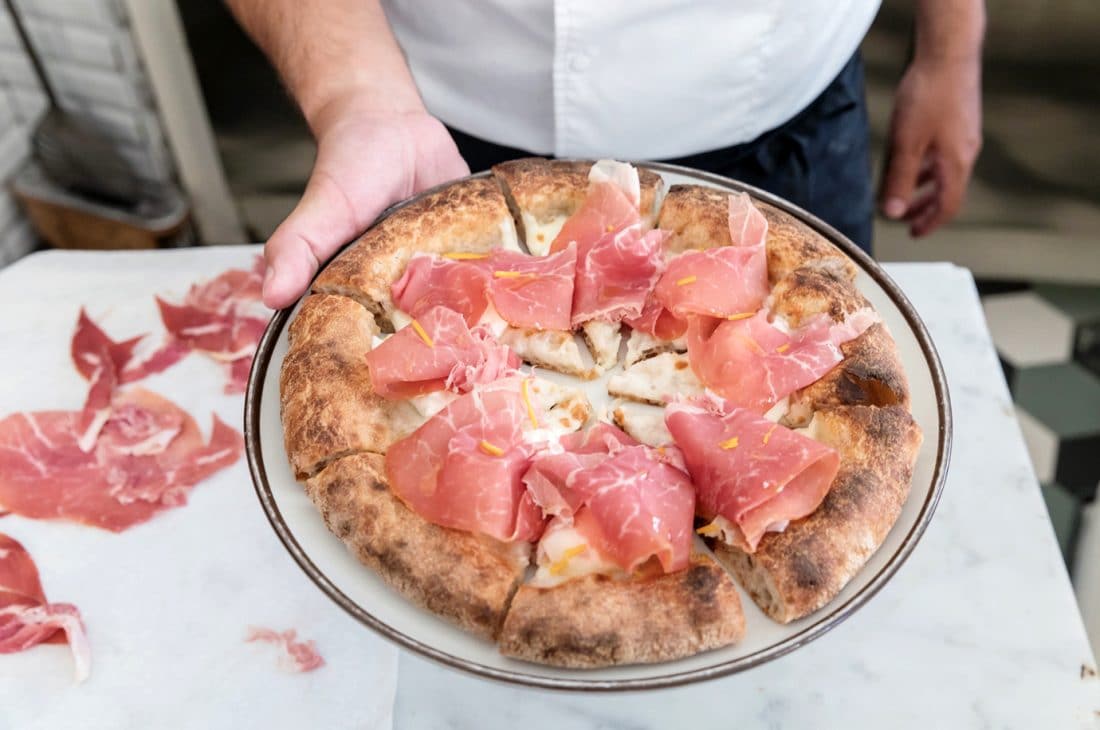 We were lucky enough to be one of the first to test out Radio Alice’s, Pizza Master Class, held by co-founder Matteo Aloe.

Although we have been working with Radio Alice for a while now, and you would have thought we knew all there was to know about their pizza, the masterclass took it to another level. Matteo took us through all the details of what really makes a Radio Alice pizza better than all the rest.

We had always assumed that there was one type of pizza that was better than all the rest, Italian pizza. But as it turns out, within this there are many other different types of pizza. And even seemingly small things from the way the dough is risen, to the way it is stretched out, to how it is placed into the oven can change the whole character of the pizza.

So, it wouldn’t be fair to go on about how awesome it was to hear all this stuff, without actually telling you a little about it! We started off with a sneak preview of tomorrow’s dough. Matteo brought out the beloved mother dough for us all to have a sniff at. Not as weird as it sounds, it smells like wine, or yoghurt due to the bacteria doing it’s thing inside. The types of flour and the temperature are also very important, Matteo selects grains that are grown traditionally. They take longer to grow, which is why they aren’t grown on a large scale, but the extra time means the crops can draw more nitrogen from the earth. The naturally present nitrogen is then much easier for us to digest than the more common, artificially placed nitrogen that is in most flour we eat.

Radio Alice’s dough is carefully timed so that it is at it’s peak just as service picks up. Often pizzerias chill their sourdoughs so that timing becomes less important. But this kills the bacteria, and it’s the live bacteria still present in Radio Alice pizzas which helps us digest the dough making it lighter on our stomachs. So they go about it the hard way, making sure to carefully calculate when to make the dough and how much they will be needing.

Next we were shown how to gently pat the dough into shape, and carefully stretch it over the backs of our hands. These little doughs are clearly sensitive souls and need a lot of care. This all means that less air is knocked out of the dough. No fancy twirling the doughs over our heads here (we were a little disappointed not to learn this trick, but if it means a fluffier crust we’re willing to let this slide).

The most nerve wracking part after successfully shaping the life out of our doughs, was getting the things onto the pizza paddle; a giant spade like thing with holes in. The paddle with holes is used because by not scooping up too much semolina they can get the perfect crunchy base without getting a burnt flavour.

The cooking process we found out is actually a little slower than traditional pizza, 4 minutes in a 300 degree oven, rather than 90 seconds in a 500 degree oven. This means they can get a nice even bake without scorching either the dough or the toppings. It allows them to get the tell tale sign of a good Radio Alice pizza (it stands up on its own!) Rather than flopping over like a classic Neapolitan pizza would.

What they put in the oven and what they don’t is another carefully thought out point, there are some of their ingredients that would be ruined by the 300 degree heat, things like the prosciutto for instance. Some ingredients love the heat of course, and so their fiordilatte are put in just at the right moment, Radio Alice’s pizzas are as big on creamy, melty cheese as any other!

At the end of the class we each got to enjoy the pizza’s we’d made, and a little of everyone else’s. Not as good as the real thing, but not too far off! We were sent home with a little sourdough mother of our own and the knowledge to give pizza making a go at home.

It was great to see and hear all about the little details that go into creating something that we are likely to scoff down in about 10 minutes… There is often so much more to a brand than what comes across on a day to day basis. Workshops like these are great for building a deeper understanding of a company and what they do. The tricky part is balancing informing people about all these great qualities without turning an evening into a lecture.

Hopefully by giving customers the chance to delve deeper into the brand, these workshops will strike the right balance. And, who doesn’t want to spend a couple of hours over some good pizza with interesting people and a glass of organic wine or two!